Winning a gold buckle in the Professional Rodeo Cowboys Association puts one in select company, and is a goal every rodeo athlete dreams about one day. In 2016, that dream came true for tie-down roper Tyson Durfey. 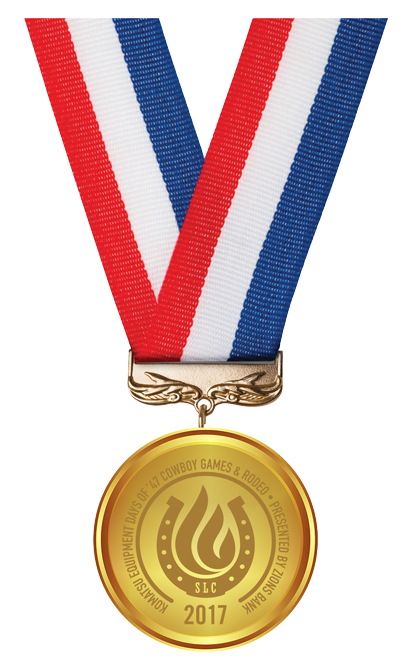 Now, Durfey is hoping to add more gold to his trophy case in the form of a gold medal from the Days of '47 Cowboy Games and Rodeo, putting him in even more select company. This will mark the first time a regular PRCA Rodeo has awarded such a unique prize. The only other two times medals were awarded to cowboys was during the 1988 and 2002 Olympic Winter Games, when rodeo was featured as part of the Cultural Arts Festival. Joe Beaver won the gold in the tie-down roping in 1988, and Jerome Schneeberger in 2002.

"It would be pretty outstanding," Durfey said when asked what it would mean to add a gold medal to his collection. "I have won some pretty cool prizes in my career over the last decade, but never have I ever won a gold medal.

"I won a car in Brazil one-time at a big competition, won a rifle, buckles, spurs and all that stuff, but never won a gold medal. If I was able to win it, to be in the company of a legend like Joe (having won a gold buckle and gold medal in his career), that would be a dream come true. When I started this journey of being a calf roper, I didn't just want to be a calf roper but wanted to be one of the best in the world, so to win it and have that honor would be a dream come true."

The medals that will be awarded at the Komatsu Equipment Days of ’47 Cowboy Games & Rodeo presented by Zions Bank, July 19-22 and 24, will be produced by OC Tanner, the same company that made the Olympic medals for the champions of the 2002 Olympic Winter Games.

"It is just such a different and unique prize because no other rodeo or competition offers that," said Durfey, of Weatherford, Texas. "I have been in competitions in Australia, Brazil, been a three-time Canadian champion and a world champion but have never seen a place give medals like that. When you think of medals you think of a world stage. You don't just think of a professional rodeo stage, so it is pretty neat. I will be shooting for gold, but whatever the Lord's plan is, we hope to live it."

In addition to the medals, there will be $50,000 up for grabs for the winner in the final round, with all the money counting toward the WEATHER GUARD® PRCA World Standings - money won will only count in the world standings if a cowboy competes at a minimum of 40 PRCA rodeos throughout the regular season.

"First, it is it extremely important that I qualify and stay in the top 10 to get there," noted Durfey, who was ranked 10th heading into a busy summer run. "Second of all, to be able to win that kind of money that counts for the standings is amazing. In the past, it was almost an unfair advantage because there wasn't as much money in rodeo a decade ago when I was first cracking out. But now, you have rodeos that are really trying to push and grow and become better. Salt Lake is just more proof of that.

"The National Finals stepped up and they are paying more money and now you have Salt Lake. So it is really important to get in there and compete well. If you draw good and win first that is a huge advantage to getting to the National Finals and potentially win a world championship."

Durfey is also excited about the new stadium and being back outside in Salt Lake City.

"I am excited for the new stadium," he said. "Over my career, I have seen a few rodeos really revamp their stage. One of them was Spanish Fork, another Utah rodeo, and it makes a new atmosphere for the rodeo itself. The Days of '47 has been outside in the past, years ago and then went to a little indoor building. I think this is really going to brand the rodeo in a new fashion that says 'hey, we are going to be one of the best PRCA rodeos in the world.'

"I think they are really stepping up and they are going to brand the rodeo in a really neat way, especially with this new outdoor facility. When you think summertime rodeos you think outdoors, so I think it is a good fit. If I know anything about them, I know it will be immaculate and well-built and I am looking forward to competing in it."

The Wrangler National Finals Rodeo, which ran from Dec. 7 – 16, wrapped up its ten-day run at the Thomas & Mack Center in Las Vegas. Total ...
Read More

Courtesy of the PRCA For the second year in a row, bull rider Sage Kimzey did what no one has done before. He actually did two things nobody has ...
Read More